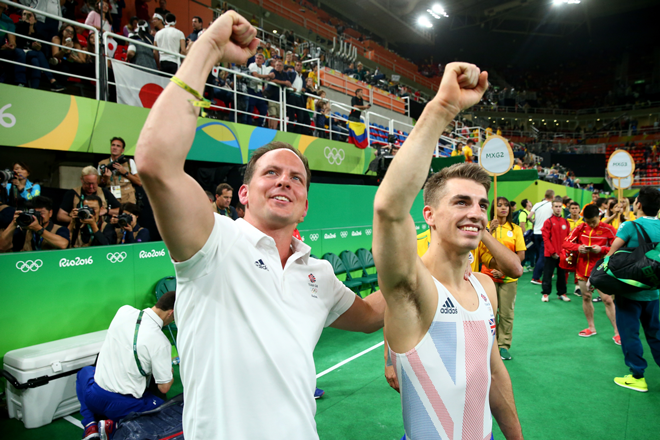 Scott Hann MBE – Director of Coaching at South Essex Gymnastics Club – has been recognised at the UK Sport PLx awards ceremony as the “Coach who has made a special impact”.

Scott, who began as a volunteer coach and is now one of the leading coaches of artistic gymnastics in the world, is personal coach to many of Britain’s elite gymnasts including most notably Max Whitlock MBE who Scott has helped guide to become one of the greatest gymnasts of all time.

On receiving the award Scott said: "It makes me massively proud that I’ve had a positive impact on so many people because that really is what this is all about; the people.

"Putting the person first before the athlete is so important. The results are a bi-product of how the athlete is treated, these results have been incredible. I’m so thankful and I can’t believe I’m sitting here in front of so many inspirational people, it really does feel very special.

"Coaching has been a massive part of my life. Over 20 years it’s taught me so much and given me so much confidence. The results have been incredible, and it gives me so much joy to see gymnasts achieve their full potential, but for me its all about the journey, the friendships I’ve made, the experiences I’ve had and the memories that mean so much to me. Coaching is about nurturing people and enabling them to be the best versions of themselves they can possibly be.

"It's an absolute honour to have won the special impact coaching award and to have been nominated by British Gymnastics, it really does mean a lot to me. It's recognition of the incredible work and support that so many people give us in the background that helps us to achieve these incredible results."

Max Whitlock commented: "Something Scott lives by is ‘find a way’ - it’s what he always says, lets find a way to achieve something and I think that’s so important when you’re trying to push the boundaries of sport. I see him every single day, but I maybe don’t say thank you enough, he’s an incredible coach but more importantly an incredible person."

Launched for the first time in 2019, the PLx awards recognise those individuals, teams and sports who have made a significant contribution to the high-performance community, are achieving great things and having a special and positive impact across coaching, support services, innovation, collaborating and team working, and social impact.

The 2021 edition of the PLx awards was hosted by UK Sport Chair, Dame Katherine Grainger and Paralympic bronze medallist and world champion Stef Reid as the great and good of the Olympic and Paralympic high-performance community were celebrated.

You can read more about the award winners here.