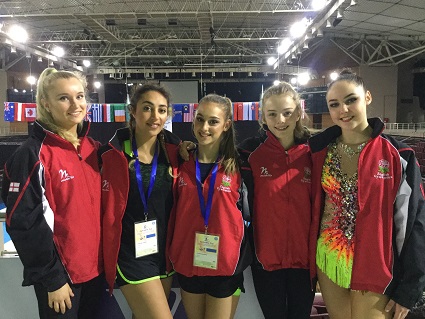 On Wednesday 22nd March, an England Rhythmic Team headed off to Greece to compete (alongside a Junior Group from GBR) at The Aphrodite Cup.  The England Team were:

English Gymnastics would like to congratulate the girls on being chosen to represent their Country at this event and wish them the very best of luck in this Competition.

Team Coach Report
March saw the England Rhythmic Squad start their campaign towards Commonwealth Games preparation, with their first FIG competition of the new cycle.  The Team, consisting of three Senior gymnasts - Mimi-Isabella Cesar (City of Birmingham), Stephani Sherlock (Esprit Rhythmic) and Christianna Vitanova (Elite) along with two Junior gymnasts - Alida Bogdanova (Elite) and Eve Baker-Roberts (City of Canterbury) travelled to Athens in Greece to compete in the Aphrodite Cup.  With three days of competition, and featuring 265 gymnasts from 23 countries, this was an excellent opportunity to gain experience and establish a baseline for the new CoP.  The England Gymnasts were supported by Ruth Wilson as Team Coach and Lisa Higgins as Judge.  All gymnasts competed well, but particular congratulations to Alida Bogdanova in reaching Finals for Clubs and Ribbon.