The 2012 British Disabilities Championships returned to the Benfield Sports Centre - Newcastle after a 2 year break. The scene was set for a double whammy of competitions with the British Veterans Competition being held the day before meant this was a busy weekend for some clubs!

Philip Davis from Croydon School of Gymnastics and Alex Clifford from Falcon Spartak both well seasoned disability gymnasts were determined to make their mark on the competition.

This they certainly did with Alex and Philip both scoring 12.5 on the vault and sharing the gold medal position. Alex also gained a gold medal on the rings. Philip then collected the silver position on the high bar followed by Alex being in bronze position on the floor.

Overall at the end of the day Alex Clifford came second in silver position overall in the Disability Championships with Philip Davis coming fifth missing out on the bronze position by just over one mark.

Both London gymnasts worked exceptionally well and we are very proud of both of them they were a credit to London Gymnastics. 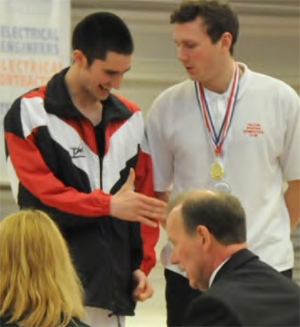