Richmond Gymnastics Association are balancing on top of the World

15th February 2016
Our London Acro Gymnasts have begun their competitive season attending the World Cup 2016, held in Puurs in the Belgian Province of Antwerp.

Lewis Walker and Isabella Motagna (Richmond Gymnastics Association) continued their medal winning ways, being awarded a World Cup Silver Medal. A score of 28.630 in their dynamic routine saw the judges award them the highest score of their competition. In the finals their score of 28.010 saw them finish just behind the Russian Pair and head of USA in Bronze. Anyone who saw this partnership perform at Night of Stars will know the artistry and beauty they bring each time they step on the floor. 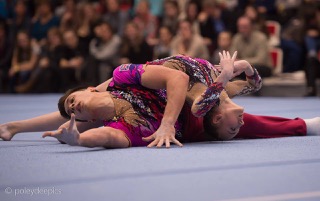 Veteran Medallist and London Gymnastics Platinum Award Winner, Jennifer Bailey (Richmond Gymnastics Association), was working with a new partnership. Joined by Katrina Fearon and Roxanna Parker they settled into their performance with ease. It was the dynamic routine in qualification where they shone scoring 27.650, the highest score of their group. In the finals a 27.240 put the girls ahead of USA in bronze and just behind the Belarussian partnership who took the Gold. Jennifer, Katrina and Roxanna should be proud of their World Cup Silver.

Kira Dunn, Sophie Sherman and Anastasia Blamey took to the floor in the Age Group Women’s Group Competition. In a closely fought final the girls ended the day in 7th but just 0.400 away from the Silver medal. The girls Balance Routine score of 27.300 was the third highest in a qualification of 16 partnerships competing. Experience gained here will serve them well in future International Competitions.
Although still only competing in the Junior Category, veterans and London Gymnastics Platinum Award winners; Kitty Williams, Tabitha Dawson and Scarlett Wright took to the floor in the Women’s Group and ensured all eyes were on them. Beating off competition from USA, Belgium and Germany the girls qualified in first after the dynamic competition with a score of 27.750. In their balance routine a 28.250 saw the competition fade even further into the distance. A final combined routine of 28.300 saw the girls take gold by almost one whole mark. This partnership continues to impress on every occasion. 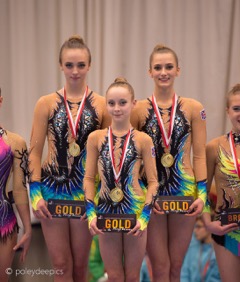 The Junior Men’s Group of Aidan Lim, Bertie Carrillo-Zallo, Christian Cox and Alexander Papworth never fail to raise a smile from those watching them perform. At London Gymnastics Night of Stars the boys wowed the audience before taking to the stage to receive their Platinum Awards. In the dynamic and balance routine only 0.05 separated the Richmond boys from Portugal. All was to play for in the finals but the boys maturity, preparation and confidence shone through. A gold medal winning routine, scoring 27.150, and beating the Portuguese partnership by over a mark and a half. 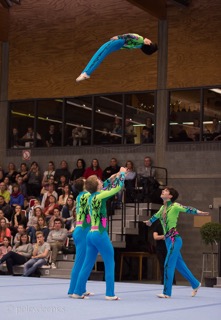 Lucy Gamble and Grace Tucker worked in the Jun+ Women’s Pair Category. As usual with this partnership they took to the floor with three consistent and confident routines. A silver medal was well deserved and will help give them experience for their year ahead.

Competing in the Age Group Women's Pair were Anna Costeanu and Ruby Riekstins in a qualification round of 31 partnerships, the girls impressed with a score of 27.200, which was the sixth highest dynamic routine. An execution score of 9.100 in their balance routine bodes well for a successful future for this partnership.

In the Jun + Women’s Group category it was Gabby Potter, Camilla Jeffcock and Beatrice Richmond that took to the floor. With twelve partnerships in this category, consistency was going to be key for the girls to achieve a successful placing. With a difficulty of 10.0 in the dynamic routine, the girls score of 27.650 was the highest in their category. In the balance routine things did not go so well for the girls. Going into the final it was important for the girls to regroup and demonstrate their maturity and focus. With all to play for the girls took to the floor and with grace, precision and artistry scored 27.250 to take a well deserved Silver Medal.
Christine Brockbank (Acro Chair) told us
“Our Acro partnerships have yet again shown the World that they should sit up and take note of Acro in London. International experience is so important for our gymnast’s development and again they have made us proud with their dedication, competitive spirit and success. Many thanks, to the coaches, gymnasts, parents and judges, for your support which makes this level of success possible.”
With thanks to @poleydee for the beautiful photographs