At our Night of Stars Evening back in November the London Region watched in awe as our wonderful acrobats performed with precision, artistry and breath-taking skills.

The announcement of the partnerships selected to represent Great Britain in the 9th Acrobatic Gymnastics World Age Group came as no surprise to us in the London Region. Our partnerships from London Clubs; Richmond Gymnastics Association, Heathrow Gymnastics Club and London Borough of Hillingdon Gymnastics Club made up the majority of the GB Team.
Anyone who has watched the gymnasts from our London Clubs will know their skill and dedication but travelling to Putian City, in China is a daunting experience for any young gymnasts. The youngest age group in the Championships was the 11-16 Category. These young gymnasts after travelling around the World had to get used to different food, unfamiliar training venues and being thrust into the Global spotlight.
Angelique McManus from Heathrow was selected to judge at the Championships.
First up in the Championships was the Qualification Rounds. With Team GB being so strong this was an anxious time for our London Partnerships. Only one pair or group could go through per category so everyone had to be at the top of their game to secure that coveted finals spot.
In the Mixed Pairs routine a beautifully performed balance routine saw Heathrow Partnership; fifteen year old Jordan Franklin and eleven year old Ella Hanna Sanz, score a 9.20 artistic score (the highest in qualification), an unfortunate 0.30 penalty saw Jordan and Ella score 28.00 whilst the pair from Russia scored 28.30. This placed our Heathrow Pair in 2nd position with the other GB pair in 3rd placing even more importance on their dynamic routine to ensure the finals spot. Every tenth needed to be fought for, for this routine it was vital to be as close to perfection as possible. Jordan and Ella yet again proved themselves scoring a superb 9.300 for execution the highest of all 16 teams in the qualification round. A well deserved final total of 55.650 and that all important Finals position secured.
In the final a score of 27.450 saw Jordan and Ella take the World Age Group BRONZE medal, this young partnership certainly made the World sit up and watch.
The Heathrow group comprising of Max Crawford, Leo Keenan, Jacob Robinson and Daniel Axford was an extremely young partnership with two of the members only being aged eleven. Competing in qualification with quality groups from USA, Russia & China the boys needed to be at the top of their game, no small ask for such young gymnasts competing internationally. However, two outstanding routines secured the boys their place in the final. The competition awaiting them in the final was a much older Russian group. In the final everything went to plan for the boys, a score of 27.500 saw them rewarded with a World Age Group SILVER medal, a brilliant 0.900 in front of the third placed USA team. The boys group will be able to take so many positives from their experience and hopefully can soon turn that Silver into GOLD!
Heathrow's Harriet Copperthwaite and Marlena Kroliczek were competing in the hotly contested 12-18 Year Old Women's Pair Category. For this event there were nineteen partnerships fighting for one of the eight places in the final. This included another strong GB partnership so it was vital the girls worked to ensure everything went to plan. After a great balance routine 27.850 for their dynamic routine secured a total of 55.300 to qualify in first place to the final, 0.500 ahead of the Portuguese pair who placed 2nd.
In the final yet again the girls produced a breathtaking routine winning the SILVER and showing the World just how beautiful their work is. A well deserved medal, for continued dedication to their sport. 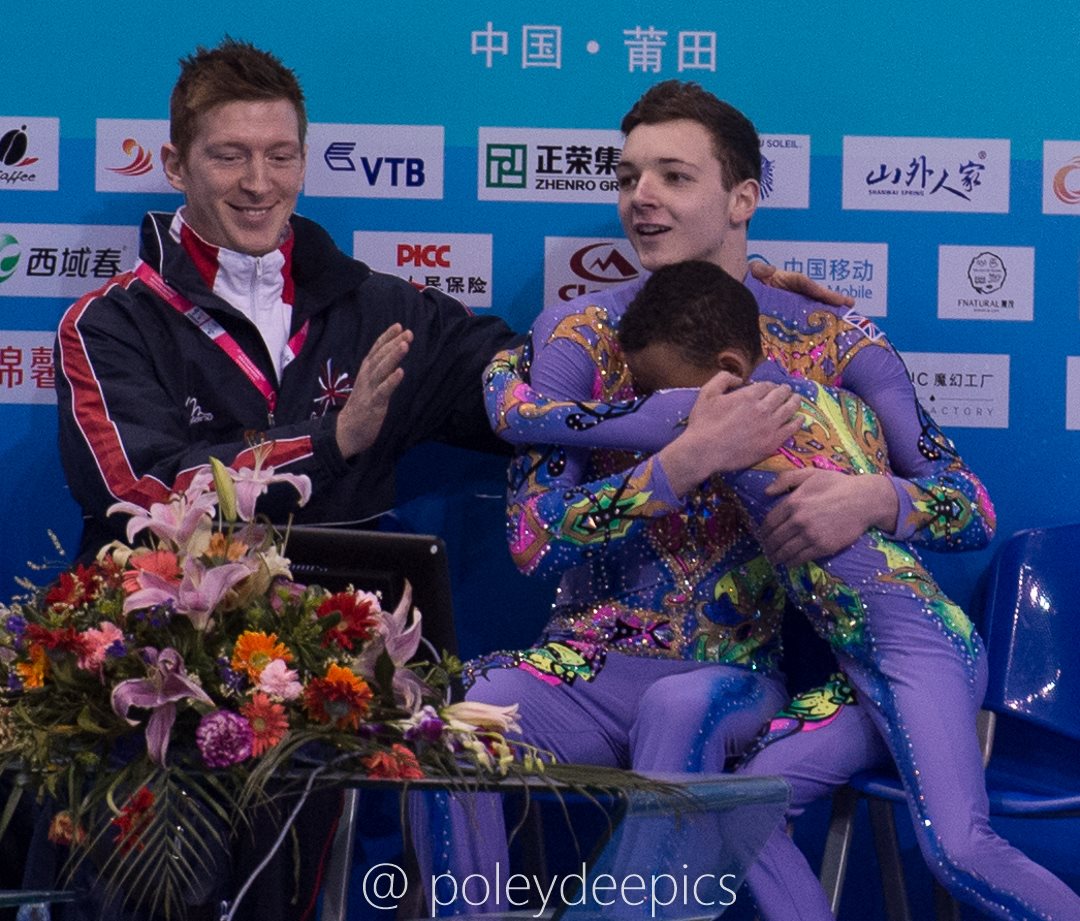 London Borough of Hillingdon Gymnastics Club certainly had something to celebrate with their first ever partnership being selected to represent Team GB at the World Age Group Championships. Callum Portugal-Walker and Kieran Blower (12-18 Men's Pair) had a good role model in 2010 World Champion & Coach Alex Uttley who could share his experience with the boys. In a nail-biting qualification it was the two GB partnerships that set the pace both pairs with excellent routines. With the final scores calculated it was success for the Hillingdon pair topping qualification by just 0.05 and straight through to the finals. For the final it couldn't have gone smoother, more celebration for Team GB as the boys impressed by winning the GOLD!
Callum (17, Base) told London Gymnastics,
"Winning the World Championships in China and representing my country is something that will stay with me forever, I can't thank everyone enough, especially my coaches for making all this possible."
We spoke to Coach Alex Uttley about his partnership's performance,
"I am so proud of what these two young men have achieved in the short time they have been together. They have worked really hard and made their Coach, family and friends really proud. They are an inspiration to all the gymnasts at our club who want to follow in their footsteps and they will now be working towards the British and the Europeans next year in the 13-19 Age Group." 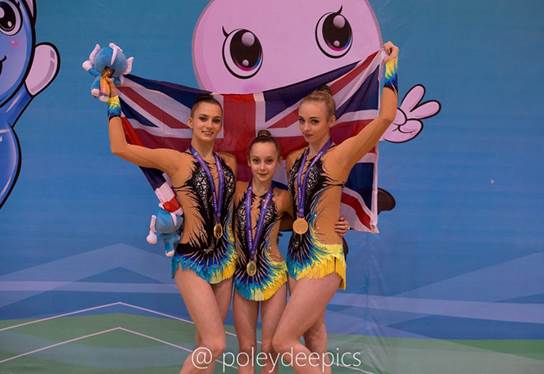 For experienced veterans of the International stage (despite their youth) Tabitha Dawson, Scarlett Wright and Kitty Williams (Richmond GA) it was business as usual. A huge qualification round saw twenty-nine women's groups fighting to showcase their routine in the final. On the day the Richmond trio just left the others trailing in their wake. First in Balance, first in tempo, the girls just needed to focus on the main goal, a clean routine in the finals. As ever the girls didn't disappoint 9.100 for an execution score in a beautifully performed routine. The other partnerships just had to stand and watch as the girls put on a master class in performance. Huge celebrations for the girls as their well deserved GOLD medals ensured a World Age Group Championship title.