History Made on the #RoadtoRio - London Gymnastics
Skip to Main Content

History Made on the #RoadtoRio 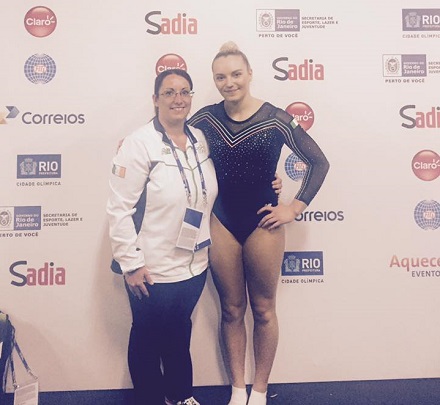 Ellis (with constant guidance and support from coach Sam James) has worked tirelessly to improve her performance on the International scene. Ellis and Sam travelled to Rio to participate in the ‘Test Event Series’. This competition allows the organisers to iron out any niggles in the organisation of the event and more importantly allows a final cohort of gymnasts to secure the golden ticket to be ranked in the top 98 gymnasts to compete in the Summer Rio Olympic  Games.
On Sunday 17th April there were four rounds of qualification for the Women’s Artistic Gymnasts. Ellis was scheduled to compete in Subdivision four and so had to wait for all the rounds to be completed. Unfortunately after her warm up was complete the Generators failed.
With no power, it meant no lighting, no computers, no announcer, no video facility. The competition was therefore held up for 55 minutes whist the LOC (Local Organising Committee) and FIG sorted out the difficulties. Not an ideal preparation and it was down to Sam to keep Ellis focussed and calm whilst all they could do was wait for the most important competition of Ellis’ career so far.
Once the competition finally commenced Ellis just needed to ensure she went clean on all pieces, the Olympic qualification was well within her grasp based on previous scores. This competition was going to be a test of Ellis’ mental toughness and focus far more than her gymnastics ability.
Starting on bars, Ellis improved her Worlds 2015 score by over 0.300. An excellent performance in such challenging circumstances. Beam was secure and Ellis was now finding her stride. Ellis is traditionally a powerful gymnast who performs her best work on vault and can produce powerful tumbles on floor. Floor went well, helping Ellis on her Road to Rio, qualification would now come down to one vault!
Slight confusion as reporters in the arena shared via twitter that there was a grey cat moving around the arena, a minor challenge for Ellis and Sam to test their focus in unusual situations. A big Handspring front ½ with a step finalised Ellis competition, a score of 13.466 gave her a total of 50.032. The wait then started, the qualification system is somewhat complicated as there are different routes a gymnast can take to secure qualification. This means that until the competition is over it is impossible to predict how many individual spots will be left.

After a tense time FIG published the final list of qualified athletes for Rio 2016 and making history once again Ellis qualified for the Rio Olympics. The first Irish Women’s Artistic Gymnasts ever to compete at an Olympics Games. So in just 14 weeks Ellis and Sam will make the journey back to Rio to join the exclusive and very select group of people who have experienced an Olympic Games.

The celebrations continued across the World with everyone sharing in this momentous day. London Gymnastics were overwhelmed with Ellis and Sam’s performance. 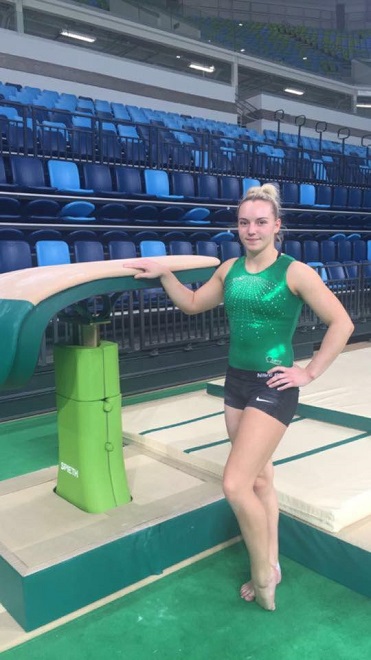 Ben Murphy, London Gymnastics Chair was delighted:
“We should turn River Thames green to recognise the extraordinary achievements of Ellis O'Reilly and her coach Sam James. We recently saw our Acrobatic Gymnasts taking World medals, and now Ellis makes history as the first female Irish gymnast to qualify for the Olympics. On behalf of London Gymnastics huge congratulations, and more importantly we wish you well in your preparations - which I am sure will be all the easier with the home support of Europa GC"

Our London Regional Women’s Artistic Chair, Bernice Negri, has followed Ellis and Sam’s journey for years:
“To be the first Irish gymnast to qualify for the Olympics is a fantastic achievement.  Huge congratulations to Ellis O'Reilly and her coach Sam James.  Over the years I have seen Ellis mature and excel in women's gymnastics.  A role model for all gymnasts to follow.  I and all of London Women's Artistic wish you every success.”
Vice Chair of London Gymnastics and Brevet Judge, Maria McLoughlin told London Gymnastics:
“It has been a great pleasure to see Ellis achieve every athletes goal to become an Olympian. She has flourished under the watchful eye of coach Sam James. I am sure Europa and team Ireland are flying the Irish flag today. All best wishes Maria Mcloughlin”
Head of Europa Gymnastics Club, Len Arnold OBE, told London Gymnastics:
"It is great to see the extraordinary achievement of Olympic qualification confirmed at the Rio test event by Ellis along with her coach Sam. We have seen many ups and downs through the development of both Gymnast and Coach over the past 15 years, the journey has not been easy which makes the result  so great. Along with the support a big Club like Europa offers in the background it all adds up to a very proud moment for everybody involved at Europa.
Good luck and best wishes to Ellis and Sam to complete this incredible and for most a unique life time experience."
We spoke to proud Mum Jackie who was delighted with Ellis and Sam’s achievements:
“I am so proud I can’t explain the way I feel with what Ellis and Sam have achieved together, to be able to say my daughter is a history maker Olympian seems so, so unreal. I cannot believe the support for Ellis that everyone has given, it's been fantastic.”
London Gymnastics looks forward to watching and supporting Sam and Ellis in their partnership as they complete their #RoadtoRio.