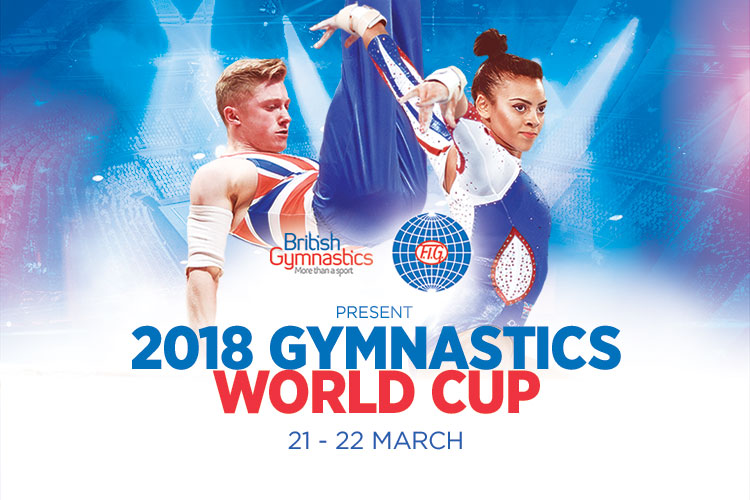 British Gymnastics is delighted to announce it has chosen Birmingham as the host city for the 2018 Gymnastics World Cup. It’s another win for Birmingham who hope to stage the 2022 Commonwealth Games.

The exciting event will take place at Arena Birmingham, in the city centre over two days in March 2018. On Wednesday 21st March, the men will battle it out on all the famous apparatus (floor, pommel horse, rings, vault, parallel bars and high bar). On Thursday 22nd March, it’s the women’s turn to wow the crowds as they compete on vault, uneven bars, beam and floor.

Each year, the World Cup travels the globe with four events staged in four different countries. In 2018, it’ll appear in the USA, Germany, and the UK, before reaching an exciting climax in Japan. Nations compete to be crowned World Cup winners with each individual event securing vital points on the leader board. Medals are awarded at each event, with gymnasts also picking up ranking points for their country.

The event will feature (up to) nine male and nine female gymnasts representing eight different countries. Nations will nominate their representatives in the spring. Historically, Olympic, World and European medallists have competed for their countries which have included the USA, Russia, China, Japan, Germany, Netherlands, Brazil and of course Great Britain. As the host nation, GB secure four spots automatically. With the depth and breadth of talent in the British Gymnastics team, the selectors will be spoilt for choice.

Jane Allen, CEO of British Gymnastics: “We’re delighted to bring this world class gymnastics event to Birmingham which has a long history of staging gymnastics championships at World, European and British Championship levels. Birmingham and the West Midlands has produced some of the most successful British gymnasts in history and it’s time to return to Birmingham and stage this spectacular event. It’s a fantastic competition, and a real crowd pleaser that’s been enjoyed by sold-out crowds over the years. Besides the display of world class sport, where you’ll see some of the world’s best gymnasts in action, there’s always a firm focus on fun and entertaining the audience.”

Councillor Ian Ward, Interim Leader of Birmingham City Council: “We’re delighted British Gymnastics has chosen Birmingham to stage this prestigious event. All eyes again will be on Birmingham as hosts of another significant international sporting event and we look forward to welcoming some of the world’s best gymnasts to our city. We know Birmingham and the West Midlands will get behind this event and we are proud to support it."

Tickets go on sale to members on Friday 29th September. The general sale starts at 9am on 3rd October and will be followed by a launch event at Arena Birmingham with GB stars Ellie Downie and Kristian Thomas. Prices start from £18 per session, with family tickets available from £48 (booking fees apply). For more information, please visit www.gymnasticsworldcup.co.uk