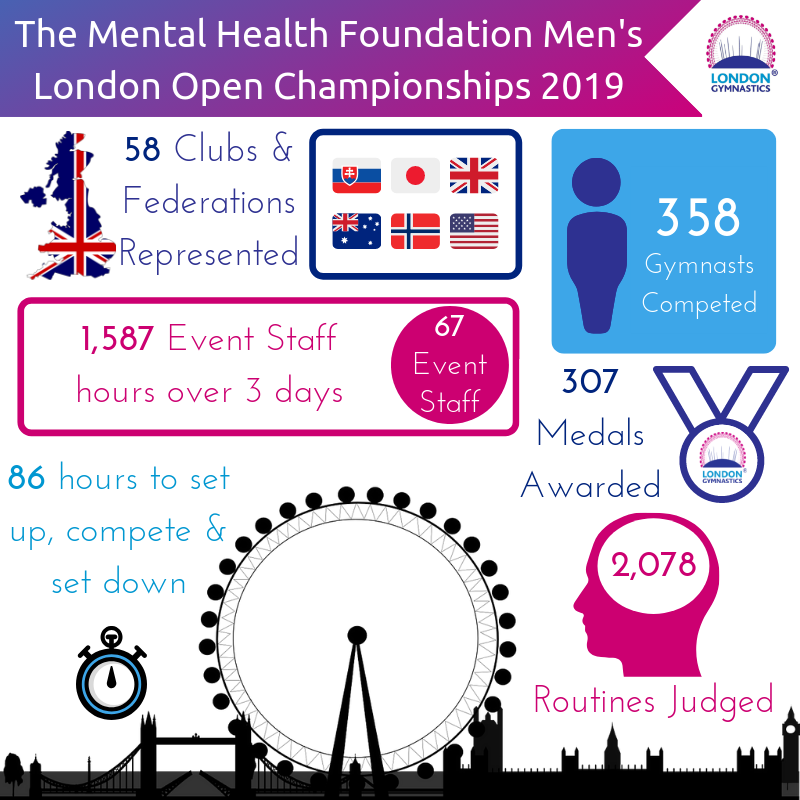 It was the 109th Men's London Open - a prestigious event, with 358 gymnasts from Great Britain, Japan, Australia, Slovakia, Norway and America competing. Our British gymnasts were being assessed at the competition for selection into TeamGB for the World Championships in Stuttgart in October.

During the event we inducted 4 new members into our Hall of Fame - find out more here: Hall of Fame

Once again our army of volunteers gave up their time to ensure that the event ran smoothly, giving the best possible environment to showcase their gymnastics.

On Friday 30th August, our Club gymnasts had their chance to shine.

Big congratulations to Josh Pettigrew from Lasswade who scored 10 on Vault in the Level 2 Club competition.

Well done to our All-around Champions from the Club Competitions:

On Saturday 31st August our Under 14's competed in the Max Whitlock Competition.

Following the Under 14 Competition, it was the turn of the Senior Gymnasts to make their mark in the Westminster Competition. The Westminster Cup was open to our highest scoring All-Around domestic gymnast. The Westminster Shield is awarded to the highest All-Around score from our London-based gymnasts. We also awarded to the highest All-around Disability Gymnast and International Gymnast. Our International Gymnasts were also eligible for Apparatus medals.

On Sunday 1st September, our Under 18's competed in the Peter Moore Competition.

Next was the turn of the Under 12's in the Brewer Competition.

Our final event of the weekend was the Under 16's in the Trevor Low Challenge.

Full results for the Championships can be found here.

Westminster Cup routines have been uploaded to our YouTube Channel: https://www.youtube.com/londongymnasticsuk

A huge thank you to everyone that made this event possible and we look forward to welcoming you back to next years' event.

We will be running voluntaries for U12, U14, U16 and U18, including Internationals
Club Grades will be Under 8, and Level 1-6, which will be on the Sunday
We will not be running a Senior Competition in 2020 due to Tokyo

We will be running voluntaries for U12, U14, U16, U18 & Seniors including Internationals
Club Grades will be Under 8, and Level 1-6