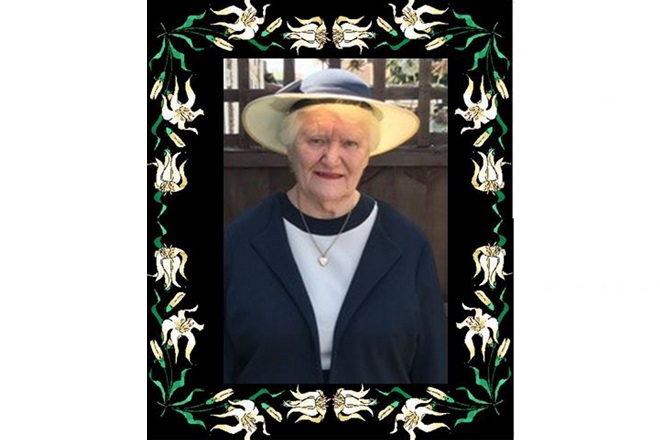 Betty passed away on Wednesday 15 January after her fight with lung cancer. She was surrounded by her family at home. This is sad news for us at London Gymnastics as she was such a big part of our community and will be greatly missed.

Betty Smethurst was a total stalwart of our wonderful sport of Gymnastics for over sixty years. Not the part that wins Olympic and World medals, but the much more important part that brings the total joy of our sport to tens of thousands of young children on a regular basis.

She has been involved – most of the time through Enfield Gym Club for very many decades.  For many years she supported the lady that ran that club (Dorrie Thurston), and when she sadly died, Betty stepped into that breach, even though she was herself, by then, well into her sixties.

Enfield Gym Club was so typical of many clubs in those days.   Working out of a local school hall, any equipment needed to be taken out of store cupboard and set up before session could begin, and then de-rigged and packed away (and continues in this form to the present day).   Back in those days there were not different coaching qualifications for what we now call ‘General Gymnastics’, so Betty was a qualified Women’s Artistic Coach.

She has trained and supported several generations of gymnasts, many of them going on to becoming coaches and judges in the sport. The charges to the gymnasts at the club were minimal, it really was sport for all.

She and the club were highly supportive back in the 1980’s of a group of clubs in the area that formed the North East London Gymnastic Association.  In the days when only FIG level competitions were run by the Region (London & Kent AGA), this group of clubs sorted out a twice-yearly programme of WA competitions for the girls well below that level, all carried out by volunteers and involving well over a thousand competitors at the different levels.

In latter years Betty was totally supportive of the General Gymnastics programme in London Gymnastics, and even when she was fighting breast cancer a few years back, still managed to come to the competitions – to keep a close eye on her own gymnasts and, also, what we were all doing!!!!

Eighteen months ago, the region recognised her great input into our sport and into the region by making her a Honorary Life Vice President and also suggested to British Gymnastics, that someone with over fifty years membership should receive Honorary Membership status.  Betty was so delighted with these honours – which were so richly deserved.

There are too few Betty’s in our sport these days.   People who never take a penny from it, give so much of their time to it – and whose love of gymnastics shines through. The best testament is that Enfield Gym Club manages to continue.

Funeral Arrangements
Betty's funeral will be held on Thursday 13th February at 13:00 at Enfield Crematorium. The address for this is:

No Flowers please. Donations to charity (to be decided). The family requests that you wear something blue!