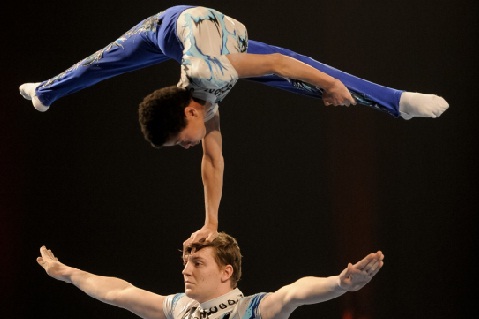 Acrobatic Gymnastics could be described as an infusion of choreography and complex acrobatic skills performed in partnership on a standard gymnastics floor area. Balance, Tempo and Combined routines are performed to music. The floor area is 12x12 metres; Duration of the routines is 2 minutes 30 seconds.

Great Britain is one of the most respected nations in Acrobatic Gymnastics and has achieved success at World and European level with medals in all categories.

Gymnasts work in harmony and trust, each responsible for their partner or partners. It is a true and testing examination of human relationships. Routines impose on gymnasts a need for strength, agility, flexibility, balance and acrobatic skills. The results are spectacular, intricate balances performed on partners, exciting multiple somersaults and twisting somersaults with partners being pitched and caught. A requirement, and opportunity to express their artistry and individual gymnastics skills makes this a delight for spectators, and a tremendous feeling of attainment for gymnasts.

This discipline is extremely spectacular and requires dynamic reactions, spatial awareness, co-ordination, power, strength and courage. The action takes no more than a few seconds but requires years of hard work.

The gymnast gains speed and power by running along a 25- metre track and performing a series of somersaults and twists. Top class tumblers perform no less than two double somersaults in one run, the best of them three, with twisting elements in addition.

Tumbling was a competitive sport at the 1932 Olympic games in Los Angeles. The name of the first (and last! so far) Olympic Champion is Roland Wolf (USA). The first National Championships were held in 1922 in Russia. In the 1960’s and 70’s tumbling was most popular in Eastern Europe and then gradually went on to spread strongly in Western Europe, the USA, Asia and Australia.