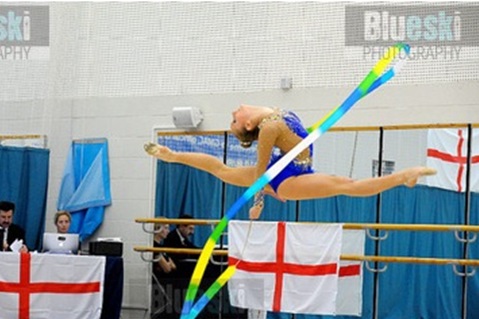 Three of the Region’s four clubs were represented at the English Rhythmic Gymnastics Championships which took place at Birmingham’s GMAC on Sunday July 5th. The competition covered six age groups – Under 9, Under 10, Under 11, Under 12, Junior and Senior, with the Region having gymnasts in all but the Under 10 section.

Our most successful gymnast on the day was Shani Moran-Simmonds from the City of Birmingham who took a clean sweep of Gold medals in the Under 9 Overall, Free and Rope competitions. Elena’s Kiera Grigg finished 7th Overall in this section.

We also have the Under 12 Overall Champion in Emily Mortimer (City of Coventry). Emily’s excellent Clubs routine saw her take that title by almost 2.5 marks, and she also picked up a Bronze medal for her Rope routine. In the same section, Daisie Burke (City of Birmingham) was the Overall Bronze medallist, having finished 2nd in the Rope and Free sections and 3rd with Clubs.

In the Senior section, Mimi-Isabella Cesar (City of Birmingham) was the Overall Bronze Medallist. Mimi is also the 2015 English Champion with Clubs and Bronze Medallist with Ball and Ribbon.

Elena’s Phoebe MacDonald finished 3rd Overall in the Under 11 section as well as taking the Bronze medal for her Ball routine.

In the largest section of the day, the City of Birmingham’s Lauren Moult was our highest ranked Junior after finishing in 9th place.