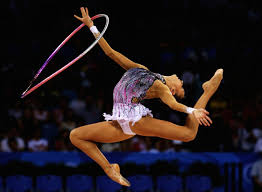 All four of the Region's clubs were represented at the British Rhythmic Gymnastics Championships which were part of the inaugural Championship Series at Liverpool's Echo Arena.

In the Individual section, our most successful competitor was the City of Coventry's Emily Mortimer who was one of only two gymnasts across the six age groups who took a clean sweep of all the titles available to her by winning the Under 12 Overall, Free, Rope, Ball and Clubs titles.  In the same section, the City of Birmingham's Daisie Burke was runner up in the Overall, Free, Rope and Clubs competitions.  In the Under 9 section, the City of Birmingham's Shani Moran-Simmonds  was the Bronze medallist both Overall and with Rope.  In the Junior category, Francesca Barker (City of Birmingham) finished 14th and Maria Savvides (Elena) 17th.  Guesting in the Junior section was Elena's Livia Haarcan whose scores would have placed her in 8th in the Overall competition and 4th in the Hoop final.

The Rhythmic Gymnastics Technical Committee congratulates all our gymnasts as well as their coaches - Tracy Bedwell and Charlotte Farrell (City of Birmingham), Scarlett Payne (City of Coventry), Sarah Smith (Elena) and Petra Milecova (Worcester)- and our two judges - Lisa Higgins and Louise MacInnes.