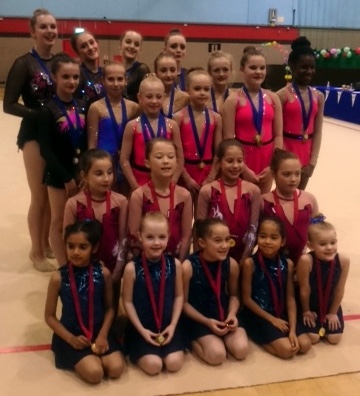 The inaugural West Midlands Championships for Duets, Trios and Group took place at Perdiswell Leisure Centre on Sunday November 1st. There were two categories for each age group - Level 1/2 for less experienced gymnasts, which is judged on the Basic Code, and Level 3/4/5 judged on the full FIG code. Over 50 gymnasts from three of the Region's four clubs took part, ranging from gymnasts in their first competition to elite gymnasts who have won medals at British Championships. There were smiles all round as the various medals were presented - both from the competitors and their proud parents. A full set of results will be found here.

The audience was also treated to display items from two very young gymnasts from the City of Coventry - Honor Brown and Anastazija Meyer - the City of Birmingham's Junior Thorns Group who were joint silver medallists at the 2015 British Group Championships, former GBR Espoir Squad member Francesca Barker (City of Birmingham) and Zara Turton who used the opportunity to perform two of the four routines she will be competing for GBR in the Down syndrome World Championships in Milan later this month.

On behalf of the West Midlands Rhythmic Technical Committee, thank you to everyone who made this competition such a success and we look forward to welcoming you to next year's Championships in 12 months' time.