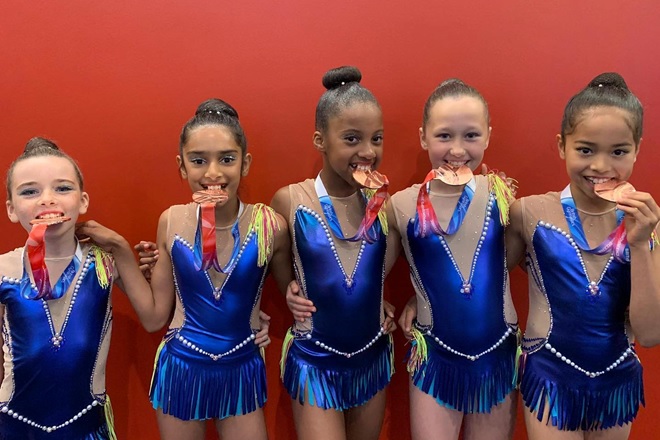 The West Midlands is now home to two of the three British Group Champions!

The City of Birmingham Stars (Daisie Burke, Jess Dodd, Amalie Howard, Alarna-Jai Turton and Olivia Whatmore) won the Senior title in their first year in this category.  Lying third overnight after their Ball routine, their performance with Hoop and Clubs gave them gold in that section and also elevated them to first place in the overall competition.

The Worcester Bluestars (Lucy Jackman, Mia Harding, Elodie McNelis and Eva Yordanova) posted their highest scores of the year for both their Free and Ball routines in the all-around competition to retain the Espoir title which they won last year and went on to take gold in the Free final and silver in the Ball final. There was also a medal in the Espoir Ball category for the City of Birmingham Gems (Ayumi Dunbar, Hannah Jordan, Cerys Mucklow, Tasia Murray and Aavni Patel) who qualified in third with the cleanest performance they have done in competition to date and then repeated that in the final to take bronze.  Elena’s Espoir Group (Kiah Everett, Lily-May Grice, Maisie Kellet, Sheariah Siebert and Francesca Tacud) also made the Ball final finishing in 6th position.

Congratulations to everyone who made these fantastic achievements possible! 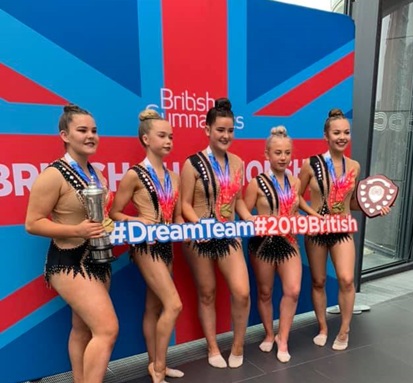 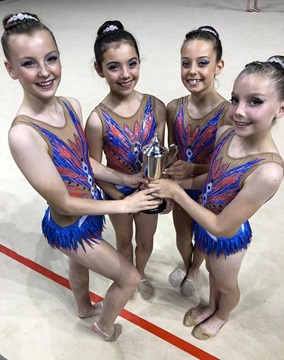