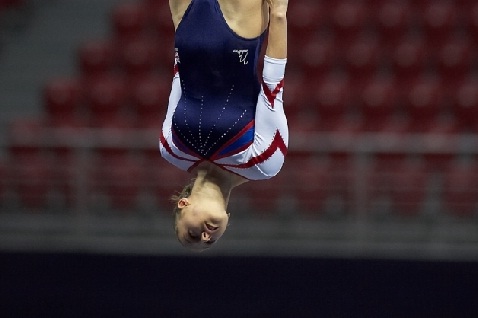 This is a spectacular sport that can require a top trampolinist to reach heights of 10 metres whilst performing multiple somersaults and twists. As well as being a sport in its own right, it is widely recognised as a training tool for many other gymnastic disciplines and sports such as diving and freestyle skiing.

Trampolining can be seen as a reflection of man's desire to defy gravity. Early civilisations devised various methods of sending a person into the air, such as using outstretched animal skins to throw them up and safely catch them on their descent. Circuses have used a number of methods to propel performers into the air for a variety of somersaults.

An Olympic discipline, the first British Olympians in Trampolining were Lee Brearley in the Men's and Jaime Moore in the Women’s event at the Sydney 2000 Games.

A Trampoline (individual or synchronised) competition is made up of three routines/rounds: Compulsory, Voluntary (both preliminary rounds) and Final Voluntary Round. Each routine is made up from 10 skills and must start and finish on the feet.

For Double Mini Trampoline (DMT) competition there are four passes, the first two in the Preliminary rounds and two in the Final round. Each pass consists of one skill performed in one of two areas, Mount or Spotter plus a dismount skill making two skills per pass.