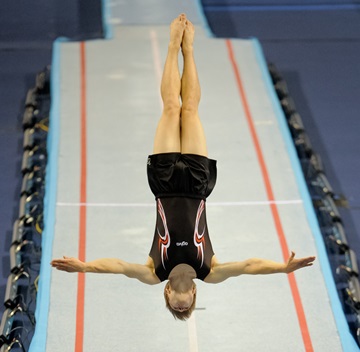 Tumbling is a characterised by the complex, swift and rhythmical succession of acrobatic bounding from hands to feet, feet to hands or even feet directly back onto feet. A tumbling pass may be over in a matter of seconds and is performed on a tumbling track that is 25 meters in length.

In tumbling, a gymnast performs a tumbling pass which sees the gymnast gain speed and power by running along a track and performing a series of somersaults and twists. World-class tumblers perform no less than two double somersaults in one run, the best of them three, with twisting elements in addition.