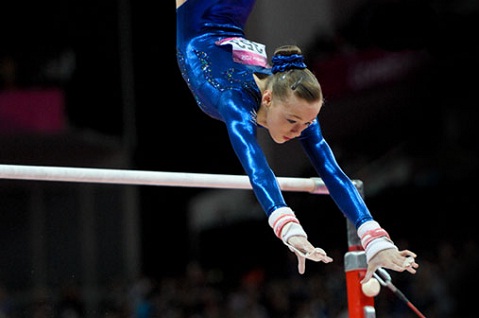 This is the most popular discipline of Gymnastics in the UK and one of the biggest crowd pleasers at every Olympic Game since 1928. The sport demands body control, body awareness, suppleness, stamina, coordination, amplitude and courage. Routines are performed on 4 pieces of apparatus: Vault, uneven bars, beam and floor.

Vault (VT)
Height from the floor: 1.25 metres. The vaulting table is placed long way, and is the same for men and women.

Each vault is awarded a value according to its difficulty. The height and the length of the vault are of crucial importance together with the exactness of the turns before and after the somersault and the controlled landing.

Gymnasts perform only one vault for Qualifications, Individual All-around and Team Final unless they are attempting to qualify for Finals on Vault. In this case, the gymnast must perform two Vaults under the FIG stated rules, the scores of which are then averaged. The top 8 gymnasts then compete in the Vault Final.

Swinging and continuous movements are required on this apparatus. The exercise should include movements in both directions, above and below the bars. Elements with twists and somersaults with multiple grip changes and high flight should be demonstrated to maximise scores. Often a spectacular dismount ends the routine.


Balance Beam (BB)
Height of the beam from the floor: 1.25 metres. The beam is five metres long and only 10 cm wide.

A routine on the beam should be an artistic combination of a variety of acrobatic elements, gymnastic leaps, jumps, turns, step and running combinations, waves and balance elements in standing, sitting and lying positions. The gymnast should use the entire length of the beam, demonstrating elegance, flexibility, rhythm, tempo, balance, confidence and control. Dismount series of acrobatic elements can be very spectacular. The maximum time on beam is 1’30”.

Floor Exercise (FX)
The floor measures 12 x 12 metres, with an additional safety border of 1 metre. The performance area must have a surface elasticity to allow for power during take-off and softness for landing.

The floor exercise, accompanied by music to enhance the performance, should combine dance movements and sequences with a variety of tumbling and acrobatic elements. The whole floor area should be used with the exercise being varied in mood, tempo and direction. Individuality, originality, maturity, mastery and artistry of presentation are key ingredients for a high score.