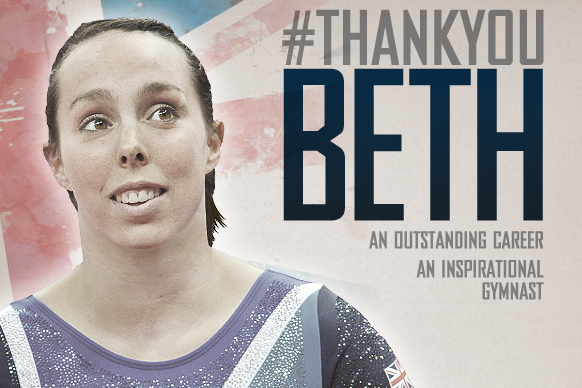 06/08/13: Elizabeth Tweddle MBE today officially announced her retirement from competitive gymnastics bringing to an end one of the greatest careers in the history of our sport. On the anniversary of her Olympic uneven bars bronze medal, Beth retires with an outstanding catalogue of achievements spanning three Olympic Games and including three World and six European Championship titles.

The first British woman to win Olympic, European or World Championship medals, Beth is considered to be the most successful British gymnast of all time. The undoubted queen of British gymnastics, Beth inspired a whole generation of gymnasts, coaches and clubs, leaving a legacy that can be seen across Great Britain.

Beth Tweddle said: “It’s been a hard decision to make; gymnastics has been and always will be a massive part of my life. Following the Olympics I’ve had a lot of projects on and recently I’ve had a bit more time to get back into the gym and decide whether I could put 100% into it and I know now deep down I can’t commit to the hours and training to remain at the very top. I’m going to miss being part of the team, my teammates, my personal coach Amanda Reddin, the buzz of the competition and achieving your dreams. There are so many people to thank for helping me, the biggest one is Amanda who has always been at my side, nothing could have been achieved without her, British Gymnastics who have supported me throughout, of course my family who have always been there for me and the British fans who have been unbelievable.

I don’t think my achievements will ever really sink in but when I do look back I can be very  proud of what I’ve done and how I’ve done it. I guess if there was anything I wanted to pass on from my time in the sport it would be that you should never let any obstacle get in your way. With hard work there’s always a way to succeed and always a way to achieve your dreams.”

Outside the gym, Beth has been an influential ambassador for the sport of gymnastics and British Gymnastics. She has devoted an enormous amount of her free time to helping promote the sport, as well as mentoring younger members of national squads/teams and inspiring future generations of children participating in clubs, schools and leisure centres around the country.

Beth remains one of the most recognisable gymnastics names and faces both here in Great Britain and around the world. Fortunately, she will not be lost to the sport and plans to continue her involvement in a range of initiatives. To this end, British Gymnastics takes great pride in nominating Beth to the FIG Athletes’ Commission and following a successful endorsement, hopes she can continue to help shape and lead the sport, she has all but owned.

Jane Allen, CEO British Gymnastics: “Beth Tweddle is widely regarded as one of Britain’s greatest ever gymnasts and her achievements speak for themselves. Beth has broken so many records and has been an inspiration to all those around her and all that have witnessed her performances. Beth’s groundbreaking achievements, dedication and commitment to succeed have been one of the key catalysts in taking British Gymnastics into an era of historic successes. British Gymnastics are delighted to nominate Beth to the prestigious role in the International Gymnastics Federation (FIG) Athletes Commission, in recognition of her outstanding achievements, her superb professionalism and her ability to inspire those around her.“

Martin Reddin Executive Director - Technical and Education, British Gymnastics: “Beth has always stood out for having had a love for everything about gymnastics and a burning desire to get better. Whenever I went to the Liverpool gym or when I saw her train at Lilleshall, she was always first in the gym and the last to leave. When she made a name for herself on bars she wanted more and worked to become an accomplished all-arounder. She was the only gymnast I have seen who had the work ethic to match that of her coach. Whatever it was going to take to be the best she was prepared to do it. She had many setbacks through injury and some disappointments at major competitions but she always came back stronger until she became World Champion and eventually won an Olympic medal at her third attempt. Without doubt Beth was special in her attitude, work ethic and the level of difficulty she packed into her bar routines. Many times I have sat in gymnastic audiences and heard the oohs from the spectators in reaction to her routines and I doubt we will see the like of her again.”

Tim Jones, Head of Performance Sport, British Gymnastics "Beth has been an outstanding ambassador for British Gymnastics. Her Olympic medal twelve months ago was a fitting finale to a wonderful career, not only completing her collection of medals at major international events, but also helping to inspire a new generation of female gymnasts into the sport. My personal memories of Beth will be characterised by her insurmountable desire to succeed, the utmost professionalism in everything she undertook, and her meticulous attention to detail. Above all she achieves such levels of success with great humility. I am sure that she will be successful in whatever she chooses to do, and I know we all wish her the very best for the next chapter of her life".

In 1997 she moved to the City of Liverpool Gymnastics Club and began her life-long partnership with personal coach Amanda Reddin, who is now Head National Coach at British Gymnastics.

In 2001 Beth won her first British all-around title, a crown she was to hold consecutively for the next seven years. At the 2001 World Championships in Ghent she made her senior debut for Great Britain placing 24th all-around and helping GB to a ninth place finish.

In 2002 Beth broke through on the international stage by taking the European Championships bars bronze medal – the first ever European medal for a female British gymnast. At the 2002 Commonwealth Games in Manchester she took the bars gold and the all-around and team silver medals.

In 2006 Beth suffered a right ankle injury that put her out of the Commonwealth Games. The recovery went well and she was able to compete later in the year at the European Championships in Volos, Greece where she took her first, and Great Britain’s first ever European title on the bars. At the World Championships in Aarhus Beth repeated this feet to become our first ever World Champion again on the bars, an achievement that catapulted Beth into the public limelight. At the BBC Sports Personality awards that year she finished in 3rd place and she remains the only gymnast to ever be nominated for this prestigious award.

2007 once again brought injury difficulties, this time with shoulder surgery, although she was able to compete as the year progressed claiming her 7th straight British all-around title along with European floor silver.
As the Beijing Olympic Games approached, Beth took 2008 European floor silver before her persistent ankle injury brought a premature end to her all-around Olympic ambitions. Beth made the decision to focus on bars and floor competition at the British training camp in Macau prior to the Games. In Beijing Beth finished 4th on the bars, an historic but also agonizing result.

After making the decision to continue on to London 2012, 2009 saw Beth take both the bars and floor European titles and at the World Championships in London she once again ruled the world, this time with the floor gold medal.
Beth reclaimed her European double in 2010 with bars and floor gold in Birmingham along with team silver, whilst at the World Championship in Rotterdam she again took the bars gold, her third World title. In the 2010 New Year’s honours Beth was appointed MBE for her services to gymnastics.

2011 saw Beth claim her sixth European title and 4th on bars and at the World Championship in Tokyo she helped Britain to fifth place and into the London Olympics.

In 2012 Beth again suffered with an injury, this time to her knee which forced her out of the European Championships. Luckily Beth was able to recover in time to be selected for the London Olympic Games.

In what was to be her final ever competition, Beth first helped the British girls to sixth place in the team event before completing her final routine in the bars final, scoring 15.916 and taking Olympic bronze.