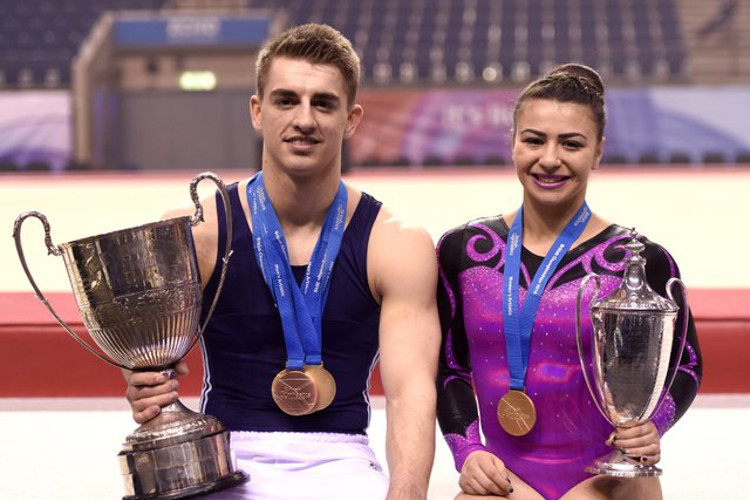 South Essex’s Max Whitlock and Bristol Hawks' Claudia Fragapane have taken the 2016 British all-around titles in front a sold out crowd at the Echo Arena, Liverpool.

Max Whitlock performed sensationally to score a personal best of 92.700 to take the title. Having never broken the 92 mark before it is a huge score for Max that would have won both the last Olympic Games and World Championships. A particular highlight was his pommel horse routine where he scored a 16.250. However that wasn’t the only 16 for the world champion, he also scored a 16.050 on the floor and an impressive 15.450 on the high bar. Max's scores also secured him British titles on the pommel horse, floor, and high bar.

Max Whitlock: “I’m really really happy - preparation went well, the build-up was perfect and that’s my personal best and I’m very happy to do it at the British. I felt good throughout the competition, tried not to get ahead of myself just focussing on the next piece, step by step and I’m happy to have done it on all six pieces on the right day.

There were two new skills for this year one on rings and one on parallel bars so it feels great to have got those out.

I’m very proud of today, I’ve never even hit that score in training and so to do it at such an important championships and win the gold its brilliant”

Taking the silver medal was Southport’s Daniel Purvis. A confident performance as ever saw him score a strong 89.500. He scored a 15.200 on the floor, one of his favoured pieces and scored top on the parallel bars with 15.450 which also saw him take this title. In the bronze medal position was Leeds’ Nile Wilson with 87.150. Nile had to count a fall first up on the high bar but fought back well to take the final spot on the podium. In joint 4th position was Pegasus’ James Hall and Sam Oldham with 86.600 and in 6th Pegasus’ Courtney Tulloch who also took the rings title with with a world class score of 16.050.

Other notable performances were Louis Smith MBE on the pommel with 15.800, Kristian Thomas on the vault scored a combined 15.150 to take the title and 15.200 on the high bar. Ashley Watson also impressed on the parallel bars with a 15.350.

Over in the women’s competition, the performances were none the less impressive. Bristol’s Claudia Fragapane took the title with a personal best score of 58.100. Claudia started off cleanly on the bars but it was the beam where she really made her mark with a highly difficult routine to score 14.750. She then continued onto floor, her strongest piece of apparatus to score a 14.700 and sealed the deal on the vault. The four time Commonwealth gold medallist was overjoyed.

Claudia Fragapane: “It feels absolutely amazing! I’ve never been all-around champion and I got a personal best so really pleased.

I was nervous to start. My bars was a little shaky and I had to fight but I dismounted well so I was happy. Beam was also a bit nerve-wracking but I landed my twists so was solid, floor I absolutely loved, the crowd were amazing and then I landed vault well so really happy overall.

To be British champion is unbelievable really I can’t thank the crowd and all my supporters enough. This gives me a huge amount of confidence and I can’t wait for my next competition now.”

In the silver medal position was comeback kid Rebecca Tunney from the City of Liverpool. Rebecca showed some fantastic work including a difficult bar set for 14.450. Her consistency helped her take the silver. In the bronze medal position was Nottingham’s Ellie Downie. Ellie had to count a fall as she began on the bars but this only spurred her on to score such scores as 14.550 on the beam to secure the final spot on the podium.Finishing in 4th was South Durham's Amy Tinkler who started off strongly on the floor, vault and bars but unfortunately had to count two falls on her final piece of apparatus which left her out of the medals. In 5th place was the Academy's Ruby Harrold who steady competition earned her a place in the top 6. Finishing in 6th was Dynamo’s Kelly Simm with a controlled performance.

Other notable performances in the women's competition were Rebecca Downie's bars and beam routines which earned her a 15.100 and 14.850 respectively. Gabby Jupp was back in action on the bars scoring 14.200.

Congratulations to all gymnasts, coaches, clubs and officials on an incredible day of gymnastics action. Competition continues tomorrow with the women's and disability apparatus finals and men's masters.

Full results can be found on our event page.

Routine videos can be found on our YouTube channel.