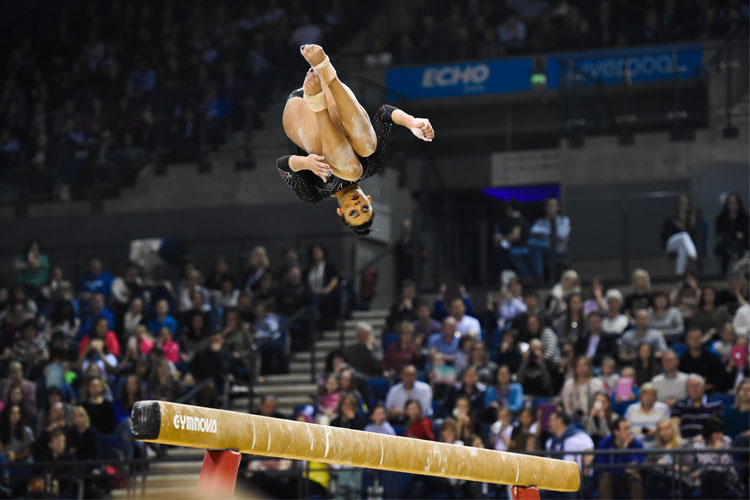 The 2016 Osijek World Challenge Cup took place from the 28th April – 1st May with GB and Notts gymnast Ellie Downie dominating the field by making all four apparatus finals and taking all four gold medals.

Ellie powered her way to the vault title on Saturday with two very impressive performances to score an average of 14.850. She then went on to take the bars top spot with a score of 14.675 to take gold ahead of a very strong Russian duo. Fresh from her victories, Ellie went on to take the beam title the following day with an almost faultless routine to score 14.950 and once again finish ahead of both Russian gymnasts. Finishing on floor, Ellie continued to shine and went for broke with some difficult tumbling to complete the set and take her fourth gold medal with 14.525.

Although this event was not an all-around competition, Ellie’s total score with all individual apparatus combined (including only her first vault score) would have been a world class 59.125. This total would have given her the all-around bronze medal at the 2015 World Championships.

Ellie said after, "I really enjoyed being here. Osijek is one of the best competitions I have ever had. I really enjoyed the whole experience. The crowd and the organization were great. Thank you all!"

Watch Ellie in action on the beam.

Ruby Harrold also competed well in the women’s event making the bars, beam and floor finals alongside Ellie. She finished 6th on beam, 5th on the bars and on the floor she just missed out on a medal finishing in 4th.

In the men’s event, Jay Thompson was back from injury and looked strong making the pommel horse final and finishing in 8th.