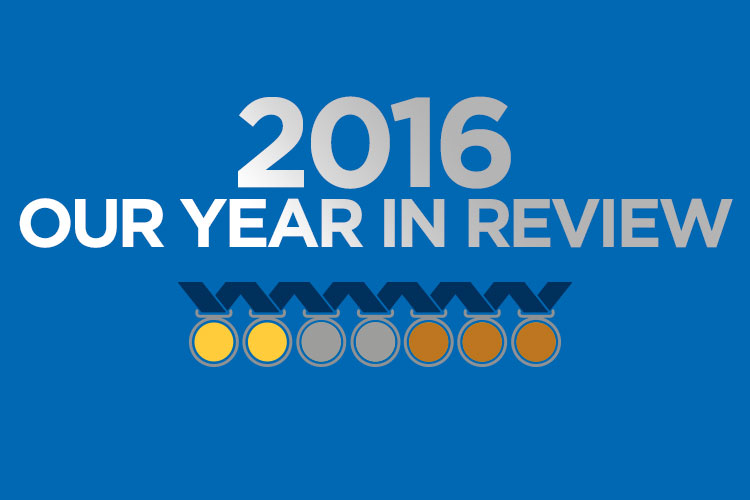 "A monumental year, our best ever" is how our CEO Jane Allen describes 2016, adding "The sport and our organisation is going through an incredible period. It started with the countdown to the highly anticipated Rio 2016 Olympic Games, it peaked with truly monumental medal results and finished with fantastic achievements to celebrate from right across our organisation."

Here is a summary of just some of the highlights from an action packed 2016!

Outstanding medal results
We recorded superb results on the world stage across all disciplines. In total we won pdf 26 medals at senior Championships in 2016. (215 KB)

A year of Awards
A number of accolades were also awarded to our staff, elite athletes, our community and to our events.

We were thrilled to win the BT Sports Industry Governing Body of the Year back in April. Our Head National Coach for men’s artistic gymnastics Eddie Van Hoof, was recently named UK Coach of the Year at the Sports Coach UK Coaching Awards. We celebrated 41 members of our community at the British Gymnastics National Awards in October. Max Whitlock won the BBC Radio 1 Teen Award for Best British Sports Star as well as being shortlisted again for BBC Sports Personality of the Year, with Amy Tinkler and Ellie Downie shortlisted for Young Sports Personality of the Year. Amy Tinkler was also on the shortlist for the Sunday Times Young Sportswoman of the Year with Ecco Gymnastics Head Coach June Adams on the shortlist for the Sunday Times Community Award. We were also delighted to see Mandi Mellor from Warrington Gymnastics Club recently named the BBC Get Inspired Unsung Hero for the North West.

Participation keeps rising
We celebrated 100,000 more ‘recreational’ gymnast members taking part in gymnastics this year, compared to 2012. Recreational participation increased through growth in our clubs by over 13% in just 2016 alone, that’s 28,000 more participants! We were also proud to report the success of our inclusive Disability Gymnastics initiatives and celebrate our 1500 members who participate in gymnastics.

Capacity in clubs has risen by an impressive 10,000 this year through supporting facility developments, satellite clubs and helping clubs to establishing new sessions in their timetable. Over 40 dedicated facility investments projects were completed with £1million invested into clubs for upgrades via our Sport England partnership. We end the year with interest in gymnastics once again soaring, our website www.DiscoverGymnastics.uk notched up a record 712,000 visits! We are rising to the demand by increasing capacity, searching for new delivery partners and through developing a new recreational gymnastics programme to rapidly deliver gymnastics in more places.

More coaches and club support
We are also helping to meet demand through training coaches, made more convenient through the launch of our eLearning system. Over 2,228 coaches have started their coaching journey this year and 8,340 coaches and teachers have gained new British Gymnastics qualifications.

We increased support to registered clubs this year, in areas such as HR, Safeguarding and Welfare. We have offered free training to club managers on topics such as Employment Law, Recruitment and Selection and will be looking to develop our offering in this area to include other topics including People Management and Equality and Diversity.

Our events continue to grow
We grew our event and festival calendar this year to give more gymnasts the chance to perform and compete. 8,000 gymnasts took part in these new opportunities - a 300% increase compared to 2015.

We’ve been focusing on our event strategy this year to ensure major gymnastics events are staged in Britain. We’re excited to stage the World Cup of Gymnastics to The O2 in London in April 2017 through a new partnership with Matchroom and we can’t wait for the 2018 artistic gymnastics European Championships to be staged in the UK as part of Glasgow 2018.

Amazing community support
We’ve enjoyed seeing so much support for gymnastics and for those who compete for Great Britain. More people than ever before have been attending our events, experiencing the thrill of gymnastics live, and thousands of you have been showing support through taking part in International Handstand Day, sending good luck messages to competing gymnasts and Jumping for Pudsey to raise money for BBC Children in Need, through a new partnership with Boots UK. We are truly thankful to our community for showing such support and having fun with us.

British Gymnastics charity support
Our charity, the British Gymnastics Foundation, continues to go from strength-to-strength, with the introduction of the Age and Dementia Friendly Gymnastics Programme making huge improvements to the lives of people living with dementia. The feedback we’ve received so far has been extremely encouraging and completely positive.

The British Gymnastics Foundation has awarded £17,519 in hardship grants to ensure people are able to stay in the sport despite going through financial hardship and we’ve had some incredible people fundraising for us that have helped to raise nearly £30,000. Our festival of gymnastics also visited two special schools in Liverpool, providing three days of gymnastics to children who hadn’t previously had the opportunity to enjoy our sport.

Focusing on the future
Whilst we take time to reflect and celebrate these results, we still have much to achieve and strive for. We have recently been awarded funding from UK Sport and Sport England which provides crucial support to help us achieve sustainable results, fund programmes to grow participation and deliver medal success. We would like to thank UK Sport, The National Lottery and Sport England for this investment. We’re excited to embark on this next chapter and the next four-year cycle. Our strategic plan has been created and we’ll focus on six strategic priorities.

At the heart of everything we do will be our customers and our mission to create lasting success for gymnastics.