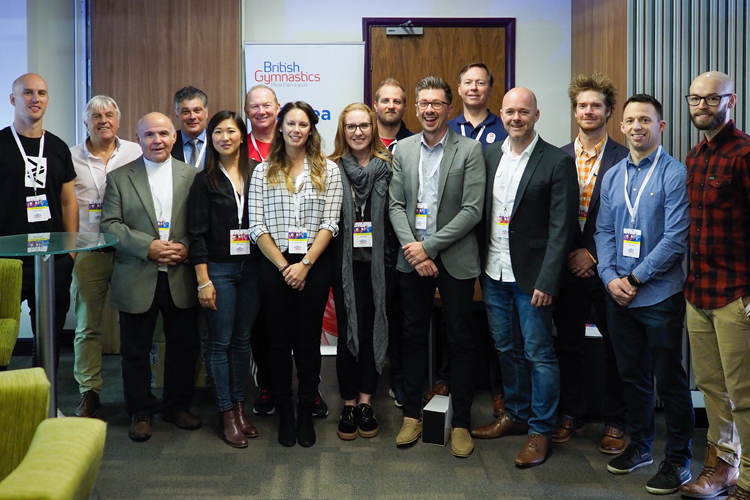 A host of former British champions have been celebrated as part of British Gymnastics 130th birthday celebrations.

Twenty one former trampoline, tumbling and double mini trampoline (DMT) champions were in attendance at Arena Birmingham, as they were invited back to receive a special award and a personal thank you at last weekend’s 2018 Trampoline, Tumbling and DMT British Championships.

The champions were involved in guest commentary throughout the Sunday of the championships and helped to present medals to the current crop of British title holders during the day.

Former men’s trampoline champions included four-time gold medal winner Carl Furrer (1981-1984); current National Coach for Trampolining Gary Smith who was a winner in 2004, the same year that he represented GB at the Athens Olympics; five-time champion James Higgins (2007-2010 and 2013), two-time champion Nigel Rendell (1985 and 1986) and Brian Camp who won the title in 1998.

Jaime Hasley (nee Moore) was champion in 1999 and 2000 and was Britain’s first ever trampoline representative at an Olympic Games when she competed in Sydney 2000. Jaime was part of the presenting team throughout the weekend.

Also in attendance were Amanda Parker, who became 2013 world champion in synchronised trampoline with Kat Driscoll, and Claire Wright, who incredibly won eight consecutive titles between 2001 and 2008, and represented Team GB at the 2008 Olympics in Beijing, finishing in 10th place.

Speaking after the event, Claire said: "It was a great honour to be invited back to watch the British Championships. It was wonderful to witness the champions of today show everyone what they have trained so hard to achieve. Congratulations to everyone who competed, that is a success in itself and a huge congratulations to those who walked away with a podium finish."

In 2003, the men’s tumbling team of Robert Small, Damien Walters, Christopher Porter and Robert Proctor made history by becoming World Team Champions. It was great to have three of the team in Robert, a five-time British champion, Damien and Christopher, who both won multiple British and European medals.

All three were in Birmingham coaching during the weekend, as was senior women’s tumbler Kathryn Peberdy who was recognised as a seven-time British champion and for becoming the first British gymnast and the first in western Europe to win a world individual title in 1997.

Joining Kathryn were 2003 World Championship tumbling teammates Charmaine Sala and Julie Cheung who both had success as part of that very team that year.

Rachael Letsche was also recognised having won the individual world title in Daytona Beach four years ago in 2014.

Aaron Stokes was the first ever British champion in DMT back in 2001 and competed in both trampoline and DMT competitions until his retirement. Joining Aaron as former DMT champions were six-time winner Matthew Swaffer, our 2002 title holder Toby Eager and 2011 champion Peter Cracknell who also assisted with the BBC commentary.

Toby said: "Thank you so much for using the 130 year celebration as a platform to reconnect me with the sport and enable me to catch up with old friends and team mates. I feel privileged to remain a part of such a fantastic community!"

Nicole Short was a two-time British title holder in 2013 and 2014 and shared her knowledge with the crowd at Arena Birmingham with her commentary of the senior DMT finals.

There were also four further special guests invited, having played a significant part in the history of the three disciplines.

The first of those was Matei Todorov, a former national coach in acrobatic gymnastics and tumbling who led the British team to historical success during a 23-year stretch from 1988.

As a former Chair of the Trampoline Technical Committee and personal coach of 2004 Olympian Gary Smith, Martin Laws was judging at the event and was also recognised.

John Beer was the national coach for trampoline for many years, overseeing the Olympic Games in 2000 and 2004 in his role and Nick Earl was recognised for being national coach in DMT, with teams winning multiple European medals under his guidance.

The gathering of former champions was the second in our Past Champions Recognition Programme, with our first coming at the 2018 Artistic British Championships at Echo Arena.