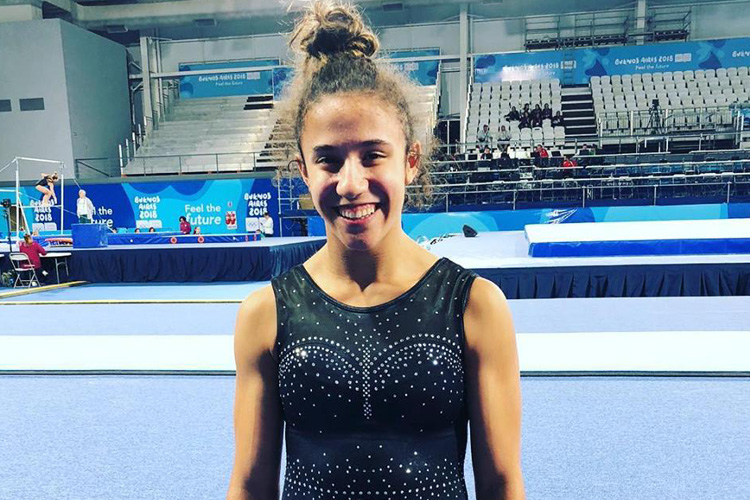 Across the opening four days our gymnasts competed in qualifying, and below you can find the report from each day. Competing in the gymnastics events were acrobatic mixed pair Clyde Gembickas and Sophia Imrie-Gale, trampoline gymnasts Andrew Stamp and Jessica Clarke and artistic gymnasts Amelie Morgan and Adam Tobin.

The event is live and on-demand on OlympicChannel.com, and you can watch daily live coverage via the BBC red button and BBC Sport website from 14:00 BST each day and highlights from 08:00 BST each day.

Day 4 (10th October 2018)
Amelie Morgan is through to another individual final after taking the eighth and final spot in beam qualification.

Amelie, who will also challenge on the floor, vault, uneven bars and all-around later this week, fell during her routine but recovered to post a score of 12.233 which was just enough to progress.

Adam ended his qualifying in the evening session by finishing 10th in the high bar with a score of 12.700, just 0.03 off a spot in the final, but does qualify for the all-around final which takes place on the 11th October.

Adam said: "I wouldn’t say the high bar was my best performance today but it was great to compete in front of this crowd – it’s not something I’m used to but I love it. I’m still targeting a medal in the all-around and hoping to be competitive on floor and rings as well."

Day 2 (8th October 2018)
Adam Tobin continued his fine start to the Games, adding a rings final to the floor and pommel final that he made on the opening day. Adam finished in fifth with 13.300, just 0.4 off the lead.

Amelie Morgan, who qualified for the women’s floor final yesterday, will also contest the vault final on Saturday after ending qualifying in fourth with a score of 13.499.

On trampoline, both Jess Clarke and Andrew Stamp progressed to their respective finals. Jess ended the day in seventh with 92.440 while Andrew qualified in fifth with 101.640. Both athletes will contest the medal next Monday in the men’s and women’s finals.

The Kent based pair negotiated their balance, dynamic and combined routines to finish with a total score of 80.960, just 1.110 behind qualification winners Israel. Clyde and Sophia will be competing for medals on Monday 15th.

In the artistic competition, Amelie Morgan and Adam Tobin both booked places in individual finals on the first day of qualifications. Amelie qualified in fourth on the floor, while Adam will contest the men’s floor and pommel finals on Saturday.