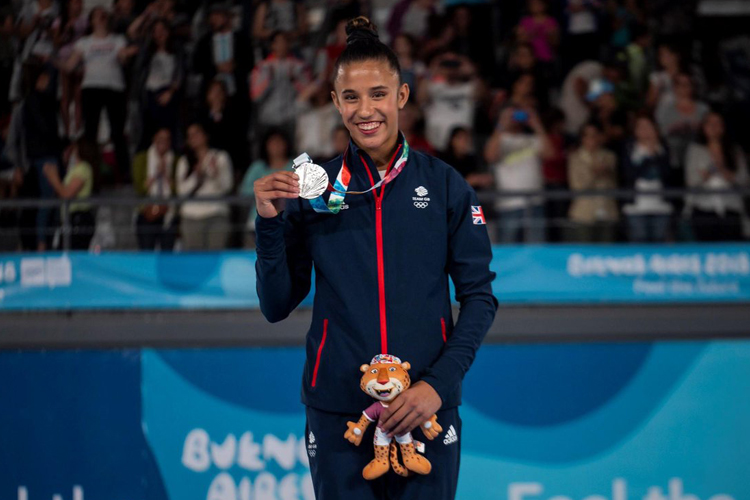 The finals of the Youth Olympic Games in Buenos Aires, Argentina saw plenty of success for our British gymnasts. Artistic gymnast Amelie Morgan impressed to win two silver and one bronze medal, and trampoline gymnast Andrew Stamp claimed a stunning silver medal in his final.

There were also encouraging performances throughout the Games from artistic gymnast Adam Tobin who qualified for and competed in five finals, trampoline gymnast Jess Clarke who finished 6th in her final and our acrobatic pair of Clyde Gembickas and Sophie Imrie-Gale who also made finals.

Read below for a day-by-day guide to the finals.

Finals day five (October 15th 2018)
The fifth day of finals belonged to Amelie Morgan who won her second and third medals of the Games.

Amelie's first medal of the day came on beam, where she scored 13.033 to take home a brilliant bronze medal.

And she was soon back in action, winning her third medal of the games in the floor final. Having qualified in fourth place, Amelie scored 13.233 to take home a second silver of the Games, missing out on gold by just 0.067.

Amelie said: "It feels absolutely incredible. I was not expecting three medals at a Youth Olympic Games coming into it so I’m absolutely over the moon. Going into this competition I knew it was my last one as a junior and I just wanted to go out there and show everyone what I can do as a junior. It will be a lot harder going into seniors but this has given me that extra confidence."

Adam Tobin was also in action in the parallel bars final, and scored 13.366 to finish fifth amongst a high class field.

Acrobatic pair Clyde Gembickas and Sophia Imrie-Gale performed well in their final, finishing in eighth place with a score of 26.770. Bulgaria took home gold with 27.850, Israel silver (27.590) and Ukraine bronze (27.450).

Having qualified in fifth place, Andrew went top of the leaderboard in the final following his score of 57.475 but had a nervous wait to see if the four gymnasts still to go could better his score. However, only China’s Fantao Fu was able to, ensuring Team GB’s seventh medal and fifth silver of these Games.

Andrew said: "This is crazy! It’s absolutely surreal but it’s just the best experience ever. I really enjoyed the competition, felt confident and just had to deliver my routine.

"I was happy to complete the routine. I felt confident and then coming off the trampoline, speaking to my coach and seeing the score come up I knew I had a real chance of getting a medal.

"It’s nerve-wracking sitting there and watching the other gymnasts but my job was done, I couldn’t do any more and I had to keep telling myself that. But it’s definitely a tense wait seeing all the other scores come up.

"This is way up there at the top of what I’ve achieved. Two silver medals at the World Age Championships but this one trumps them all."

Jess Clarke competed in the women's trampoline final and finished sixth with a score of 49.410

Jess said: "I’m so happy and it’s certainly not something I thought I would achieve at the start of this year. It was a really tough final, with a lot of excitement and I wasn’t sure I would make the final so I just wanted to perform clean routines."

Adam Tobin competed in his third individual final of the week, finishing fifth on rings with a score of 13.033. He’ll be back for the high bar final.

See the full results from the trampoline competitions.

Finals day three (October 13th 2018)
Amelie Morgan and Adam Tobin just missed out on the medals as their individual apparatus finals got underway in Buenos Aires.

Amelie finished in fourth on the uneven bars after being edged out of the medals with the last routine before finishing sixth on vault.

Adam also competed in two apparatus finals, finishing in seventh on floor and ninth on pommel.

Both Team GB gymnasts have two finals left with Amelie still to go on floor and beam on Monday while Adam will contest the rings final tomorrow (Sunday) and parallel bars the day after.

After sitting in fourth after two apparatus, Amelie went through her final two routines clean to get on to the podium.

Amelie said: "I’m over the moon to be stood here in second place at the Youth Olympics. I was definitely a bit more nervous coming into this event knowing that the standard was that much higher than what I’ve competed against before. I just went out there and did the best that I could and it’s paid off.

"I knew at the end if I put in a good routine on floor I’d win the medal but it’s hard because you can’t afford to get too excited because that’s how mistakes happen.

"This is one of the best experiences I’ve ever had. I’ve still got two more days of finals so hopefully they go according to plan too.”

Finals day one (October 11th 2018)
Having successfully qualified for the all-around final, artistic gymnast Adam Tobin impressed to finish in fifth in a high-class field.

Adam put in a determined performance and produced a brilliant vault when need to finish fifth with some particular moments of brilliance, most notably on the vault, to finish fifth overall with a score of 79.573.

Adam said: "I was pleased with fifth. I was in ninth at one point and had to do something spectacular to get back in the top six. I had to do the best vault I could and I did, I stuck that and got a high score."

Adam will compete in four individual finals – floor, pommel, rings and parallel bars – and said he is "aiming for top three in the floor and hopefully rings too."

See the full results and schedule from the artistic competitions.