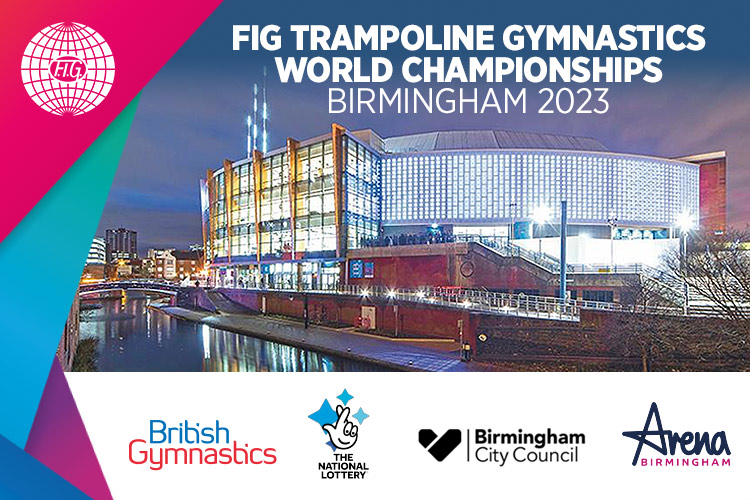 Birmingham has been selected as the host city for the 2023 World Trampoline, Tumbling & DMT Gymnastics Championships, bringing the first major sports event to the city following the Commonwealth Games in 2022.

The event will take place between the 9th – 19th November 2023 and will be held at Arena, Birmingham, the same venue as the successful 2011 Trampoline Gymnastics World Championships, where the British women’s trampoline team won world silver.

With three spectacular gymnastics disciplines in action over the ten days, Birmingham will witness a great selection of world class gymnastics skills.

Soaring 20ft in the air, performing high-flying somersaults and twists, the trampoline gymnasts will no doubt wow the crowd as they look ahead towards Paris 2024. In the tumbling we will see the world’s best thunder down the sprung runway at a mind-blowing fast pace, and the double-mini trampoline gymnasts will impress as they launch themselves into two daring aerial tricks.

Birmingham has played an important part in the rich history of gymnastics. It has been the home city for many gymnasts that have achieved incredible feats on the world stage and has played host to multiple European and World level events. The championships will also include the World Age Group competitions which will bring together the world’s best up and coming trampoline, tumbling and double-mini trampoline gymnasts to the city.

British Gymnastics Chief Executive Officer, Jane Allen, said: “We are thrilled to have secured another world class event in Birmingham, a city that we have a fantastic history with. It is a great opportunity to promote and showcase gymnastics and in particular the disciplines of trampoline and tumbling in the UK to inspire the next generation of gymnasts.

In partnership with UK Sport and Birmingham City Council we were delighted to put forward such a strong bid to the International Gymnastics Federation (FIG) and we look forward to welcoming the world's very best for an exciting championship."

Simon Morton, Chief Operating Officer at UK Sport, said: “We’re delighted that the UK has been selected to host the 2023 World Trampoline Championships, and that National Lottery funding will be supporting the continued staging of major international sporting events in Birmingham, in the year after it hosts the 2022 Commonwealth Games.

This will be a fantastic showcase of the world’s best athletes ahead of the Paris 2024 Olympic Games and demonstrates international confidence in the UK as a leading host of innovative and inspirational sporting events."

Cllr Ian Ward, Leader of Birmingham City Council said: “We are delighted to have secured the 2023 World Championships for Birmingham, thanks to the work done with our partners at British Gymnastics, Arena Birmingham and UK Sport.

“Building on the city’s first-rate track record for hosting international sport, this event will provide two weeks of world-class competition, attracting over 1,500 competitors and officials from all over the world as well as a global media audience.

“Following hot on the heels of the Birmingham 2022 Commonwealth Games, this event will undoubtedly provide a significant economic benefit to the city and help maintain our international profile.”