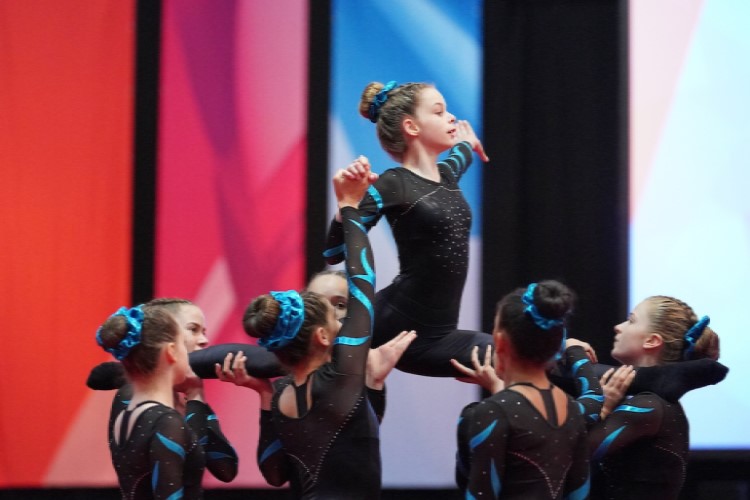 The 2019 TeamGym British titles have been decided on a spectacular day of competition at M&S Bank Arena in Liverpool as part of the 2019 Championship Series event.

Teams from all over Britain converged in huge numbers, creating a fantastic atmosphere and demonstrating great gymnastics skills, teamwork and technique across the floor, trampet and tumbling disciplines.

The senior men’s gold medal went to the team from Reddam with a score of 54.150, closely followed by Hawth in silver with 54.100 and Waterside in bronze (23.050). Bracknell won the two-team battle for the senior mixed crown scoring 51.550 to Crewe & Nantwich’s 50.300, whilst Portsmouth Diamonds are the women’s 2019 champions scoring 47.350 for their performance.

Reddam took the junior mixed gold medal scoring 47.500 with Scarborough in silver and the team from Bracknell in bronze. Heathrow won the hotly contested junior women’s title scoring 49.200 ahead of Leatherhead & Dorking and City of Newcastle in bronze.

The Youth competition saw Reddam win the men’s gold (43.450) followed by Hawth and Forth Valley. The mixed title also went to Reddam (42.450) with Scarborough in silver and Leeds Esprit taking bronze. Scarborough then won the women’s youth gold (45.000) from Hawth in silver and Leatherhead & Dorking in bronze.

The Championship Series continue with the acrobatic titles decided on Sunday along with the rhythmic apparatus medals and TeamGym Challenge events.

Full results can be found here.