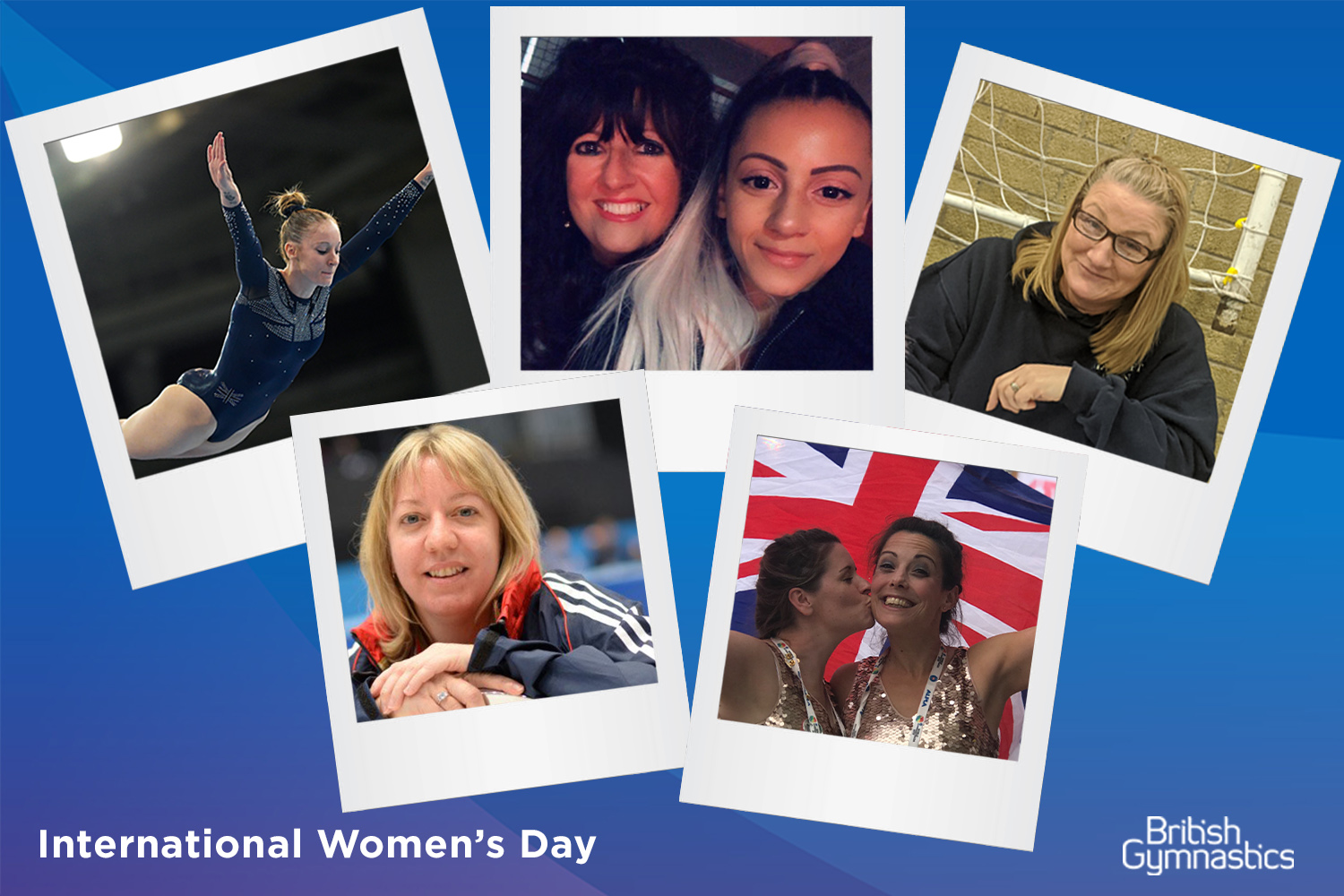 To mark International Women’s Day 2021, we are celebrating some of the key female role models in gymnastics, all of whom carry out different roles in our sport.

Gymnast - Kat Driscoll
In recent years, we have experienced success for a number of female British gymnasts. One gymnast that has been a mainstay in the world of trampolining is Kat Driscoll. Kat is one of Britain’s most well-known trampoline gymnasts and has been amongst the world’s best for over 20 years. Since becoming senior British Champion in 2009, Kat has gone on to have great success on the world and European stage. She has won 10 major championship medals and in 2016 she made history alongside Bryony Page, by making the final of the women’s trampoline competition.

Aiming for what could be her third Olympic Games selection later this year, Kat’s career is one that has inspired many young gymnasts across the country and she’s aware of her role as an icon in the trampolining community.

“I think being a role model for younger girls is a huge responsibility. You can have so much impact on their life and the smallest things you say can be so influential for them. I’m conscious of that so I like to stay as true and authentic to myself as I can be, sharing the good and the bad so they understand that everything is not simple or easy.

“Most people see the end product of what we do which looks great but I try and show the day-to-day stuff that we do in training and talk about the things that haven’t worked or the struggles that I’ve had. I think as a role model it’s important for people to see the good and the bad, so they can see the true picture of what’s going on.”

Coach - Wendy Lucas
There are thousands of coaches across the UK who are helping to share the excitement of gymnastics with the next generation of budding gymnasts. For many children, festival gymnastics is where their passion lies as it allows them to be creative and come up with themed routines with their friends. Wendy Lucas from Hamilton Gymnastics has been involved in the sport for over 23 years and her club has over 1,000 members, many of whom are part of their Gymnastics for All programme. Wendy is heavily involved in festival gymnastics. She is a festivals representative on the Gymnastics for All Technical Committee and in 2019 she was one of the choreographers for Great Britain’s team of 800 gymnasts at World Gymnaestrada.

“I coach gymnastics because I love gymnastics. I want every gymnast I meet to experience the reason why I think gymnastics is the best sport to be involved in!

Judge - Nikki Hanley
As well as coaches, judges are an integral part of gymnastics. The competitive aspect of our sport requires great judges who understand and apply the discipline specific rules in a fair, objective and consistent way. Nikki Hanley is one of many British brevet judges to have judged at the highest level of the sport. In 2013, she made history by becoming the first female to judge a men’s artistic World Championships and whilst Nikki remains the only female judge in this area, she feels that attitudes have changed from other countries and hopes more will send their female brevet judges to these competitions.

As well as the World Championships, Nikki has judged at European Championships, Commonwealth and University Games, World Cups and the London Olympic Games in 2012 where she was a line judge.

“I remember the first day I was line judge on floor and I think Germany was the first team to walk into the arena. As they came in, 20,000 people started cheering and my heart was hammering! That experience for me was just incredible.”

Volunteer - Margaret Turner
Behind all of our amazing gymnasts and hard-working coaches are dedicated volunteers who help to keep the sport thriving. Volunteers play an active role in the gymnastics community, helping out in clubs, at events and on our committees. Margaret Turner is one of these incredible people who performs a number of roles at Ballysillan Gymnastics Club. Her main role is as treasurer but she is also a first aider and is endeared to as ‘Dr Turner’ by the kids at her club. She also provides support as an assistant coach from time-to-time but overall, Margaret is considered to be the ‘gym mother’, helping to create a family atmosphere at the club.

In 2020, Margaret was recognised for her hard work and was awarded the Northern Ireland Volunteer of the Year.

“Margaret is an ordinary parent with an extraordinarily big heart. The love and devotion she brings to the club is felt by all. The support she provides to the club comes in many forms but is clearly highlighted in her dedication to the gymnasts, her diligence as a club treasurer and her willingness to jump into any task at a moment’s notice. Her involvement has truly changed Ballysillan Gymnastics Club, making it a better place to be.

Parent - Helen Downie
And finally, many of our gymnasts wouldn’t be where they are without the support and dedication of their parents and carers. They play a pivotal role in encouraging and supporting their child’s involvement and success in gymnastics. This is something Helen Downie and parents across the UK will have shown.

As the mother of two Olympic women’s artistic gymnasts, Helen backed their dreams and has seen them become icons in the gymnastics world.

“She’s encouraged me to get back on my feet every time and has always encouraged me to make my own decisions and do what I feel is best for me. I’m extremely grateful that we were able to call home a place of relaxation and fun and a space to get away from gymnastics which I think has been the most important thing and I can’t thank her enough for being there for me.”